Although we are now in the season of goodwill, there is precious little of that coming from North West London NHS bosses, who as you will read below won’t give up their plans to cut our Hospital. Nevertheless we are determined to keep on fighting and we hope you will continue to support us. This Saturday we will be out on the streets for our Xmas Day of Action – so please come and join us, the more the merrier.

This is now an annual feature in our campaigning diary. It’s always good fun and we get a great response from shoppers as we tour round the local shopping centres. We will have our colourful leaflets and stickers to give out and a megaphone to draw attention. Adding to the impact in a big way is our poster- covered Car with P.A system spreading the ‘word’ with maybe a bit of singing “All we want for Xmas is our A&E”.

We start off leafleting in Southall from 11.00 – 12 .00 noon in Southall, opposite the Town Hall while our PA car tours round. Then from 12.30- 1.30pm we will do the same again in West Ealing near Sainsbury’s before heading off for lunch in Pret a Manger in Ealing Broadway to have a sociable and well-earned chat and sandwich break. Our final session will be from 2.45 – 3.45pm in Ealing Broadway (M&S) where there should be lots of Xmas Shoppers.  If you can join us at any point that would be lovely (contact number on the day 07960 309457) 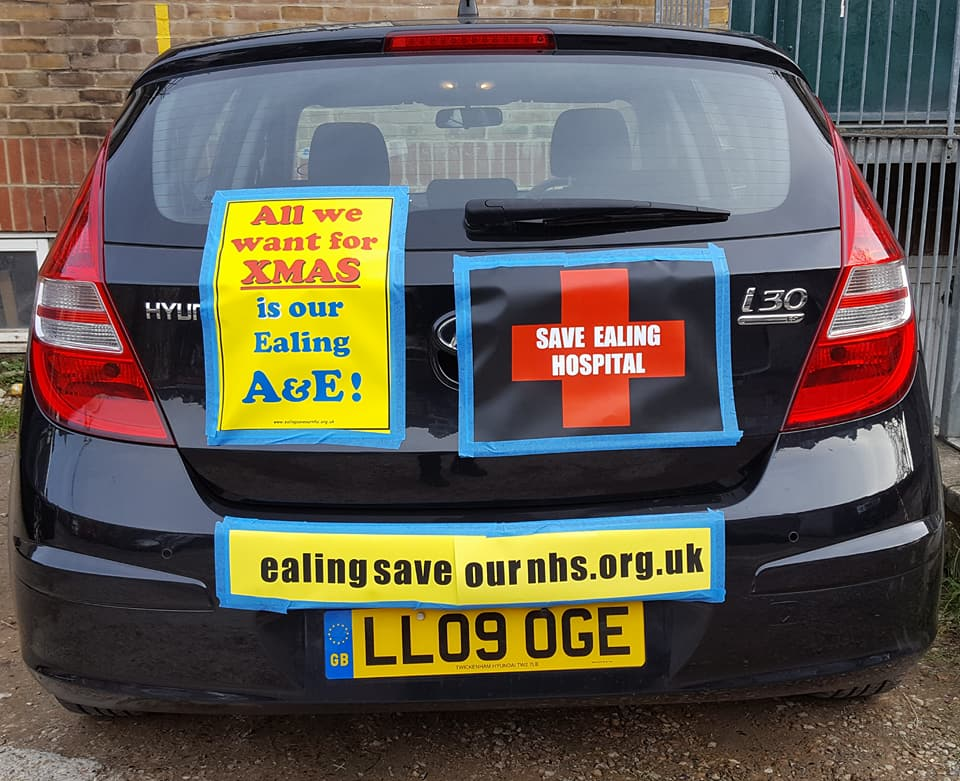 In our last Newsletter we were pleased to inform supporters that NHS North West London bosses had been forced to admit that their projections for future bed numbers, made in ‘Shaping a Healthy Future’ in 2012 were wrong and that bed numbers were in fact going up, Following a ‘review’ (ha) they now expected bed numbers in North West London to remain the same for the next 5 years. Since the 500+ planned beds cuts were at Ealing & Charing X Hospitals this sounded like good news.

BUT, the trouble with our NHS bosses is that they are doggedly committed to the ‘Shaping a Healthy Future’ (sic) plans to downgrade our hospitals. So when we asked Mark Easton, boss of NHS NW London whether they would now disband their plans for Ealing Hospital, he said that whilst bed numbers in North West London would not be cut, the location and type of beds could still change in the next 5 years. In other words Ealing’s acute beds are still at risk.

One of the big factors is whether NHS NW London can get the capital from national NHS bosses, to create alternative beds. They are hoping that NHS Improvement will say yes to their second request for half a billion capital.  The first request was turned down last year (with a little nudge from ESON researchers) as their projections for reducing emergency hospital admissions were unbelievable. Nothing has changed in the last year, except emergency admissions are going up not down!  Of course they could try and cook the books and there is evidence for thinking they just might be doing that.

Over a hundred people, including 6 from Ealing attended a hugely informative ‘Reclaim our Social Care’ Conference organised by Health Campaigns Together in Birmingham last month.

The state of social care and in particular the appalling conditions that care workers have to endure is shocking. For example around 1 million older people who need care don’t get it. Nearly half of the 1.3million people working in the care sector earn less that the real living wage of £9 an hour and one in four are on zero-hours contracts. Our social care system is definitely working well for private care providers who make a whopping 13% profits whilst at the same time local authorities are making 20% cuts!

Moving people more quickly out of NHS hospitals into social care not only transfers the financial burden but also means that people have to pay, unlike for NHS treatment. No wonder the Government is so keen on so-called integrated care. We look forward to supporting this national campaign as it develops and working with the newly founded Ealing Social Care Action Group.

National ‘NHS Safe for All’ Campaign to be launched:

We all know our NHS staff work hard to get us well and keep us safe. Yet 8 years of under-funding, NHS pay falling behind and rising staff shortages have all taken their toll. Inevitably things go horribly wrong and we usually hear about it in the media. Of course the real culprits don’t get the blame as the media loves a good scapegoat, usually a doctor or nurse or both when the real problem is a failure of the system.

This should be a really exciting campaign uniting, patients, families, NHS staff, campaigners and the wider public.

You can read more here in the Health Campaigns Together newsletter. –

Save the NHS money and have a little dance or go to the library!

In a recent speech Health Secretary Matt Hancock set out his ideas for ‘social prescribing’ asserting that “prevention is better than cure”. ‘Social Prescribing’ has existed in the NHS since the 1990s and allows a clinician to refer to or suggest, activities such as dance lessons or art classes to aid a patient’s recovery in certain circumstances.  Mr Hancock said that social prescribing can ‘help us combat over-medicalising people’ and help the NHS to save money.

To this end he is setting up a new Academy for Social Prescribing as a resource for GPs and others. Libraries are to play an important part in social prescribing “ If correctly trained on social prescribing referrals, librarians can play an important role in keeping people well in their communities, encouraging them to take dance classes, join choirs to tackle loneliness or become part of mental health reading groups, Mr Hancock said. So it seems GPs and Librarians are to become social workers too!

It would almost be laughable if it wasn’t the case that the Government’s austerity policies have led to library closures and drastic cuts in preventive health services such as substance misuse services.

More on this story here –

Get Involved – come to our Campaign Meeting Tuesday 11th December:

It’s our last Meeting of the year so mince pies are on the Agenda as will a bit of a review of recent news and events. We always welcome new people to helping with campaigning and our campaign meetings are a good place to start so it would be great to see you.

Please come if you can: 7.30pm, Tuesday 11th Dec in Northfields Community Centre.