There was anger and cheers at the Ealing Save Our NHS public meeting last Tuesday. The room in Ealing Town only seated 150 – another 50 people had to stand around the sides and at the back.  John Lister set the tone by describing how ridiculous claims were being made to justify bed cuts and A&E closures.
Private management consultants were being paid millions of pounds to write reports that didn’t stand up.  Tens of millions of our NHS money was paid to finance companies for PFI hospitals – huge interest payments that were totally unnecessary.
As well as being a respected researcher on health policy, John is a veteran campaigner and national Secretary of Keep Our NHS Public.   ACPs or Accountable Care Organisations are the latest Government plan for running, commissioning and privatising our NHS. “They are unaccountable” said John, “They don’t care and they don’t organise properly.”
Hospital consultant Gurjinder Sandhu held the room spellbound as he described the pressures faced by staff. He vividly described patients who needed looking after, while staff had to put up with constant undermining by managers in various ways. More ambulances are being diverted to Ealing A&E than any other in London, but staff are told Ealing A&E can be closed under their cuts plans.
The people in the room were loud in their appreciation of Gurjinder and junior hospital Doctor Aislinn Macklin-Doherty as well as all the other NHS staff.  The pressures on hospital staff described by Gurjinder were radicalising junior doctors, Aislinn explained.  Doctors who had once been of a conservative persuasion were demonstrating and even striking.
Local Labour MP Rupa Huq talked about her support for the campaign to save Ealing Hospital and promised that her party would put a moratorium on all NHS cuts.
Eve Turner was an animated chairperson.  She thanked the local council for defying the Government over hospital cuts.  She told the meeting that local Health bosses planned to put Ealing  NHS community services out to tender in a single ten year contract, worth something like a billion pounds of our NHS money.  The contract could be won by a private company, or by a part of the NHS forced to compete with other sections of the NHS. 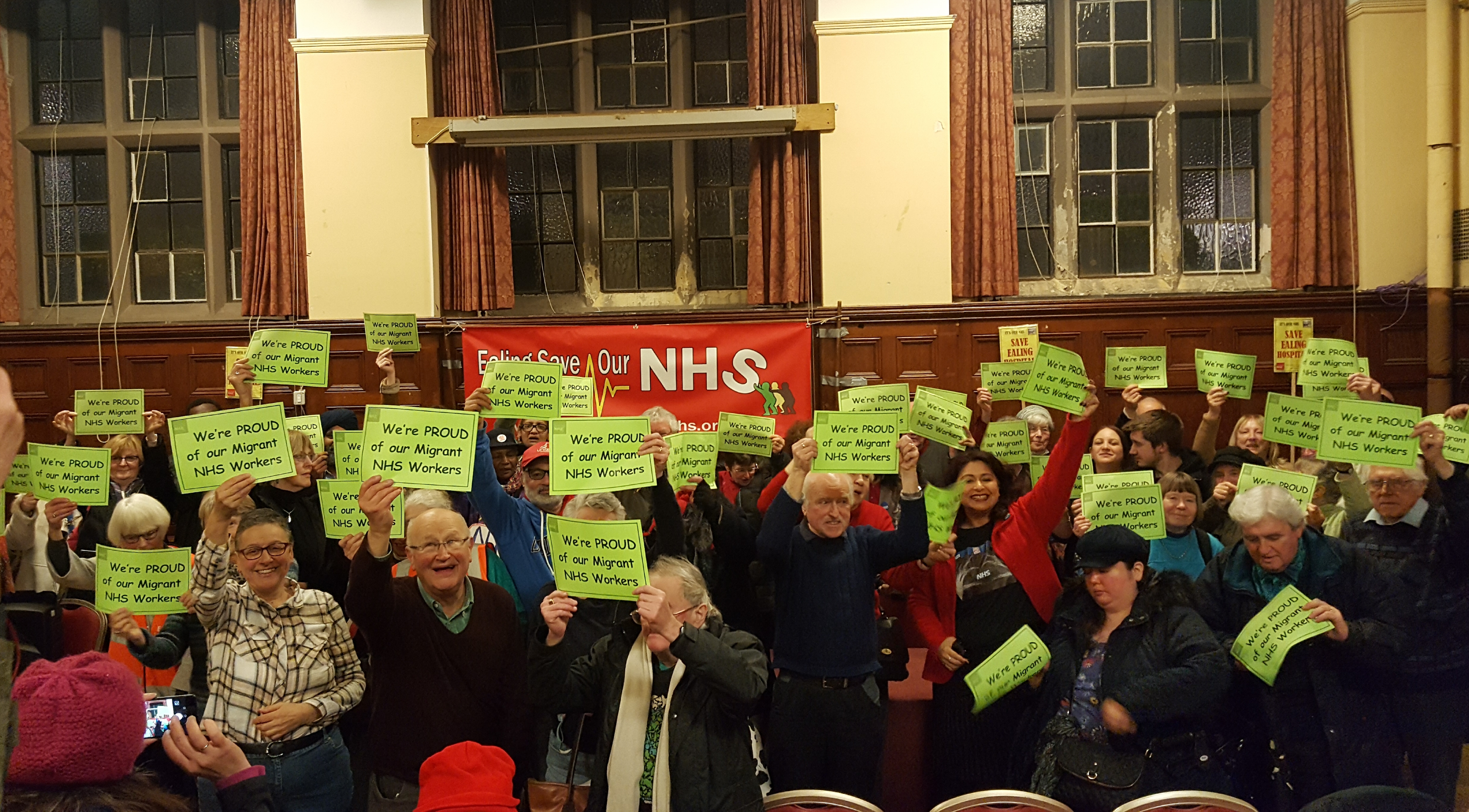 There were lively questions from the floor.  At the end of the meeting dozens of us joined together for a photoshoot in support of migrant NHS workers.  We held up posters saying “We’re PROUD of our Migrant NHS workers”. Because we are.  With all the pressures facing the NHS, one of the nastier policies followed by the government is to pretend that the problems are caused by migrants, both patients and staff.  We are in solidarity with all NHS staff and we demand the NHS carries on being for all who need it, not for those with money, or those who are deemed worthy of care.
Our answer to divide and rule is solidarity.

Ealing Save our NHS, Public Meeting,13th February 2018, Excerpts from Ealing Save Our NHS on Vimeo. 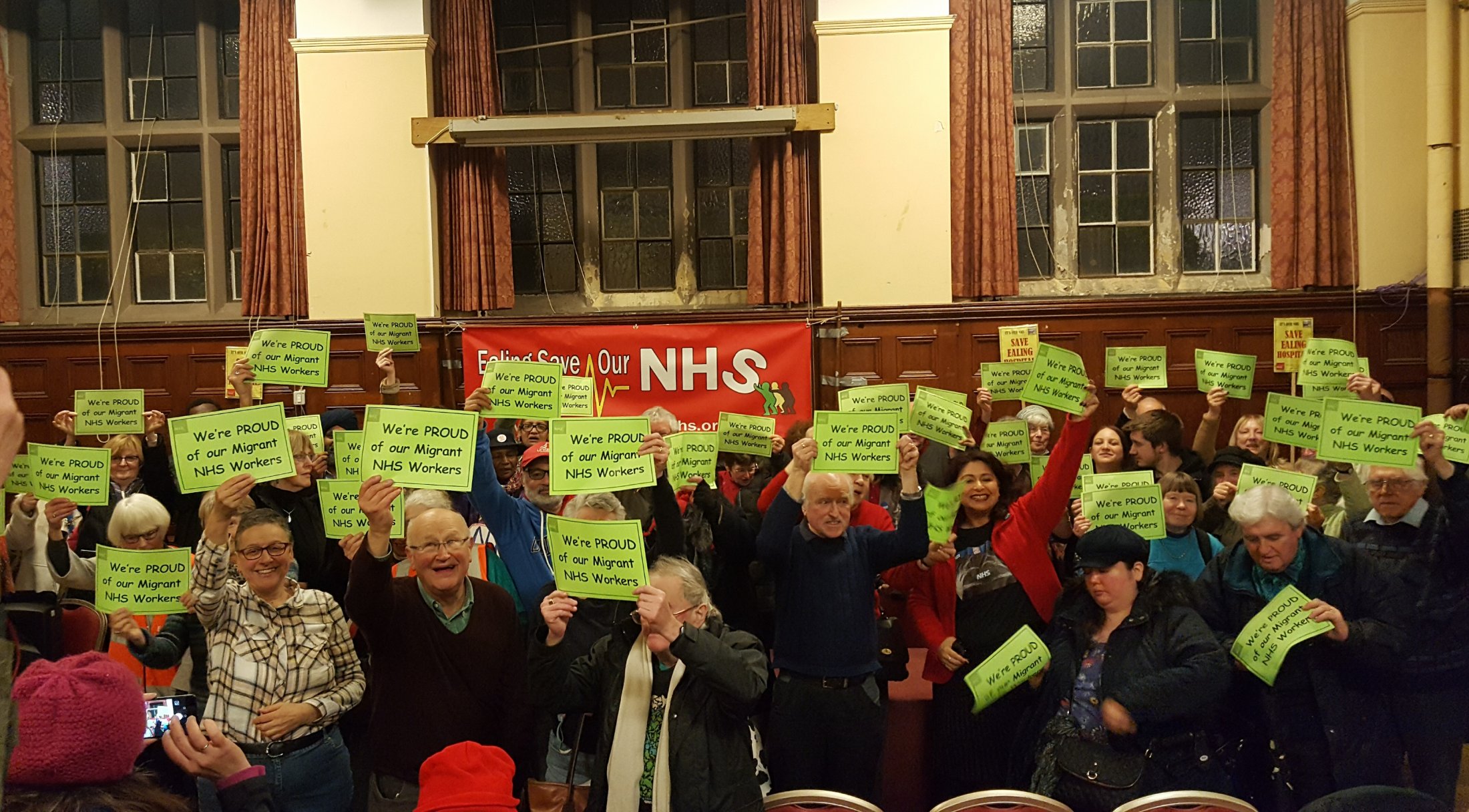 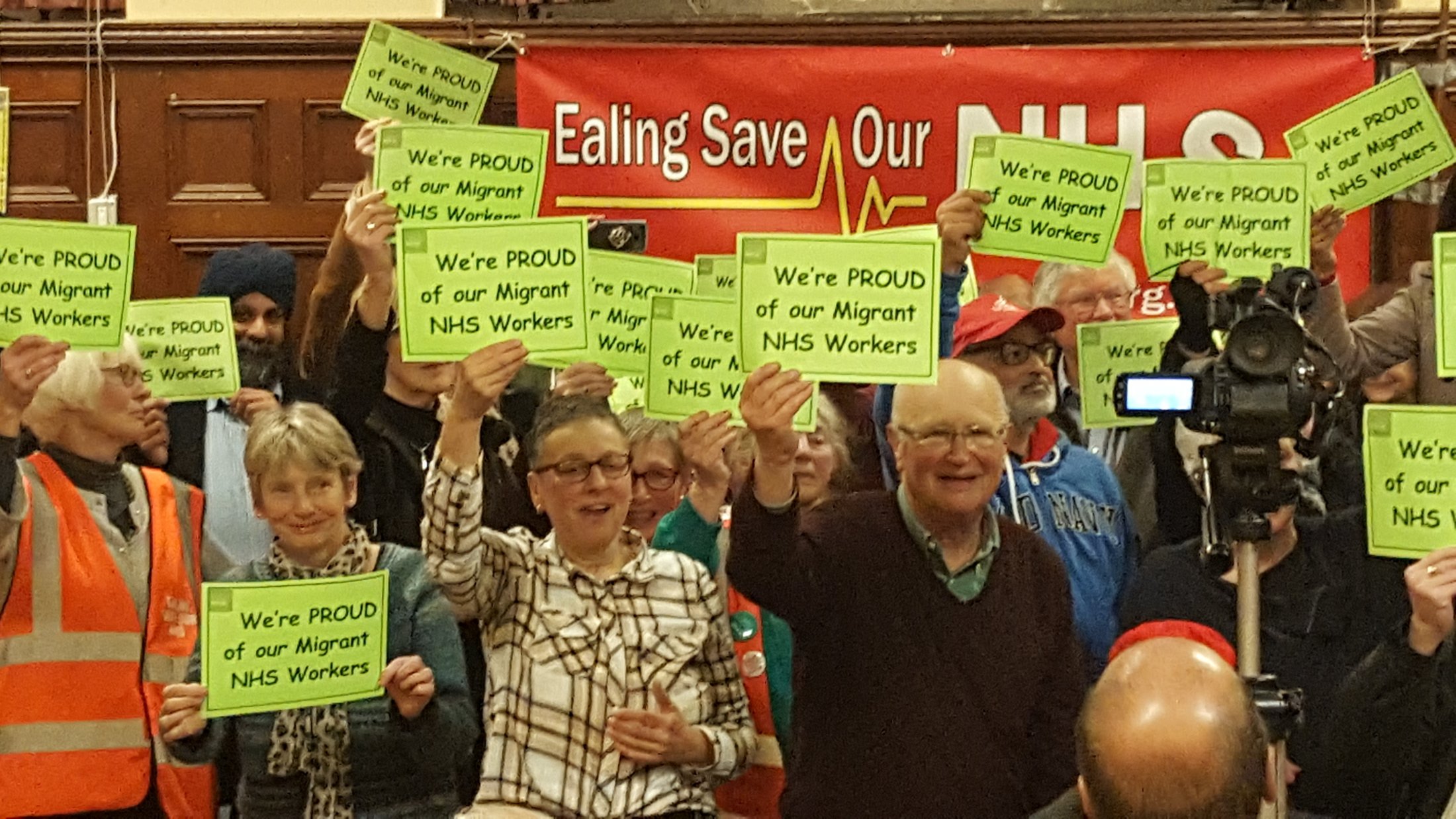 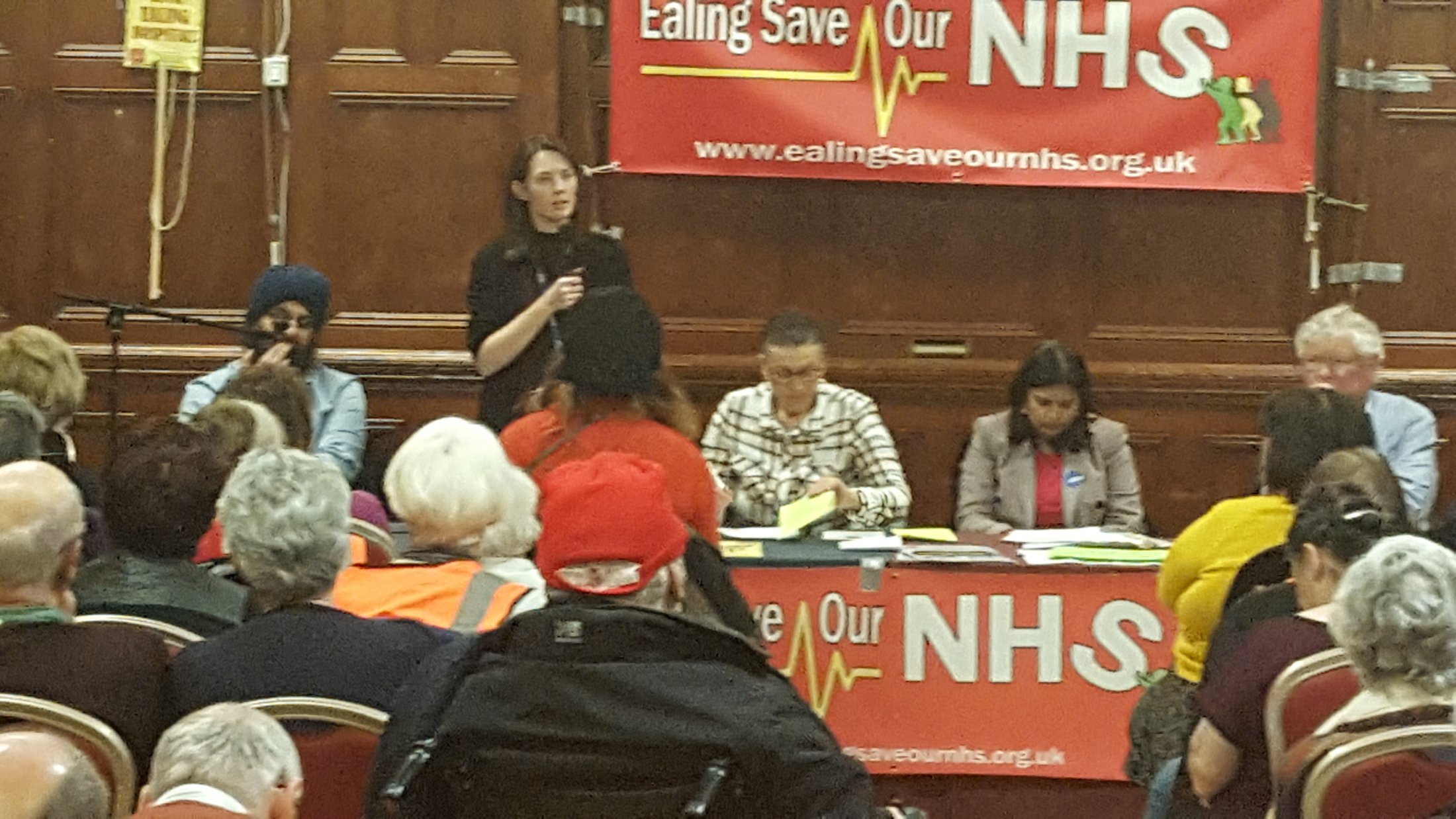 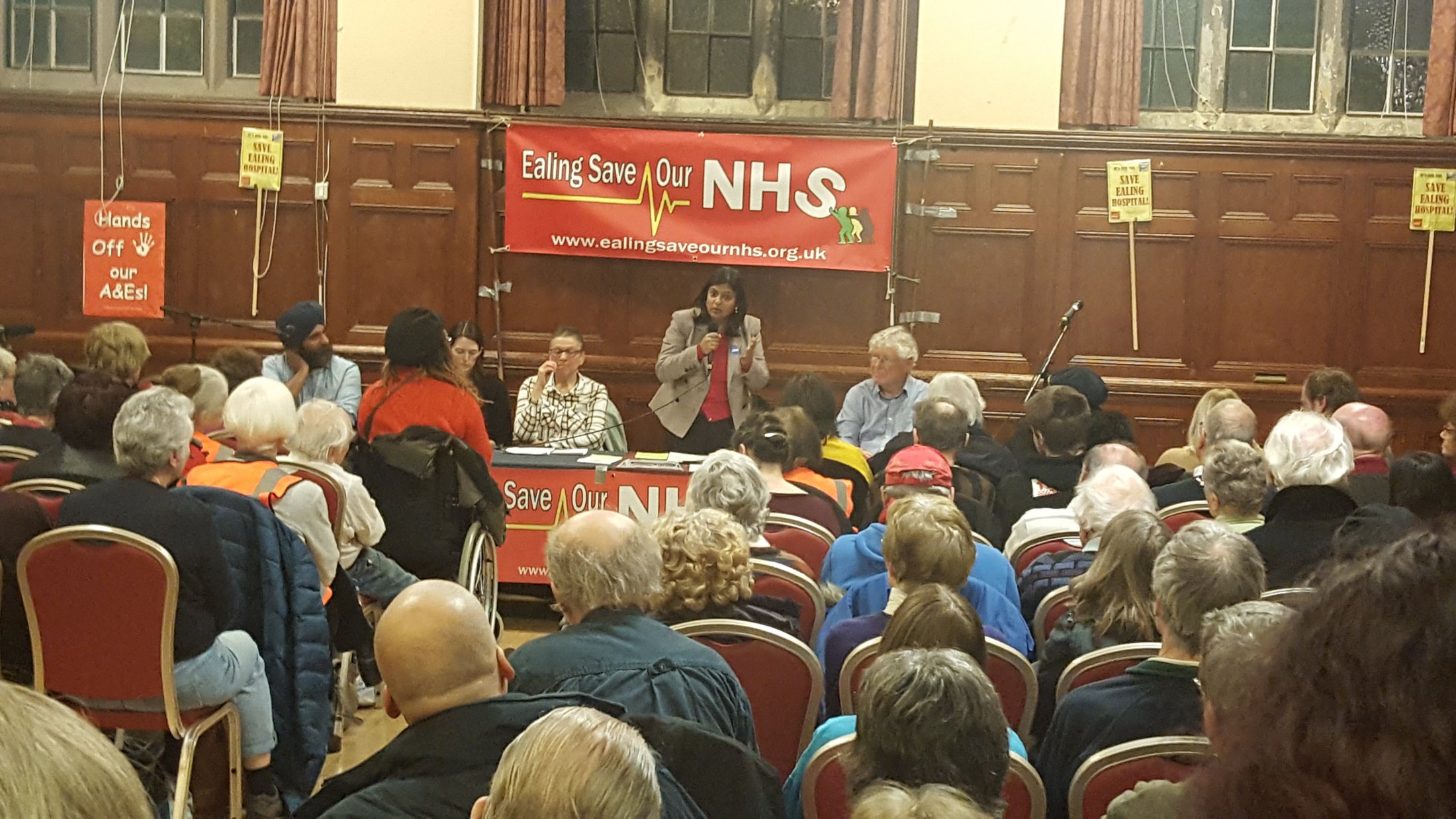 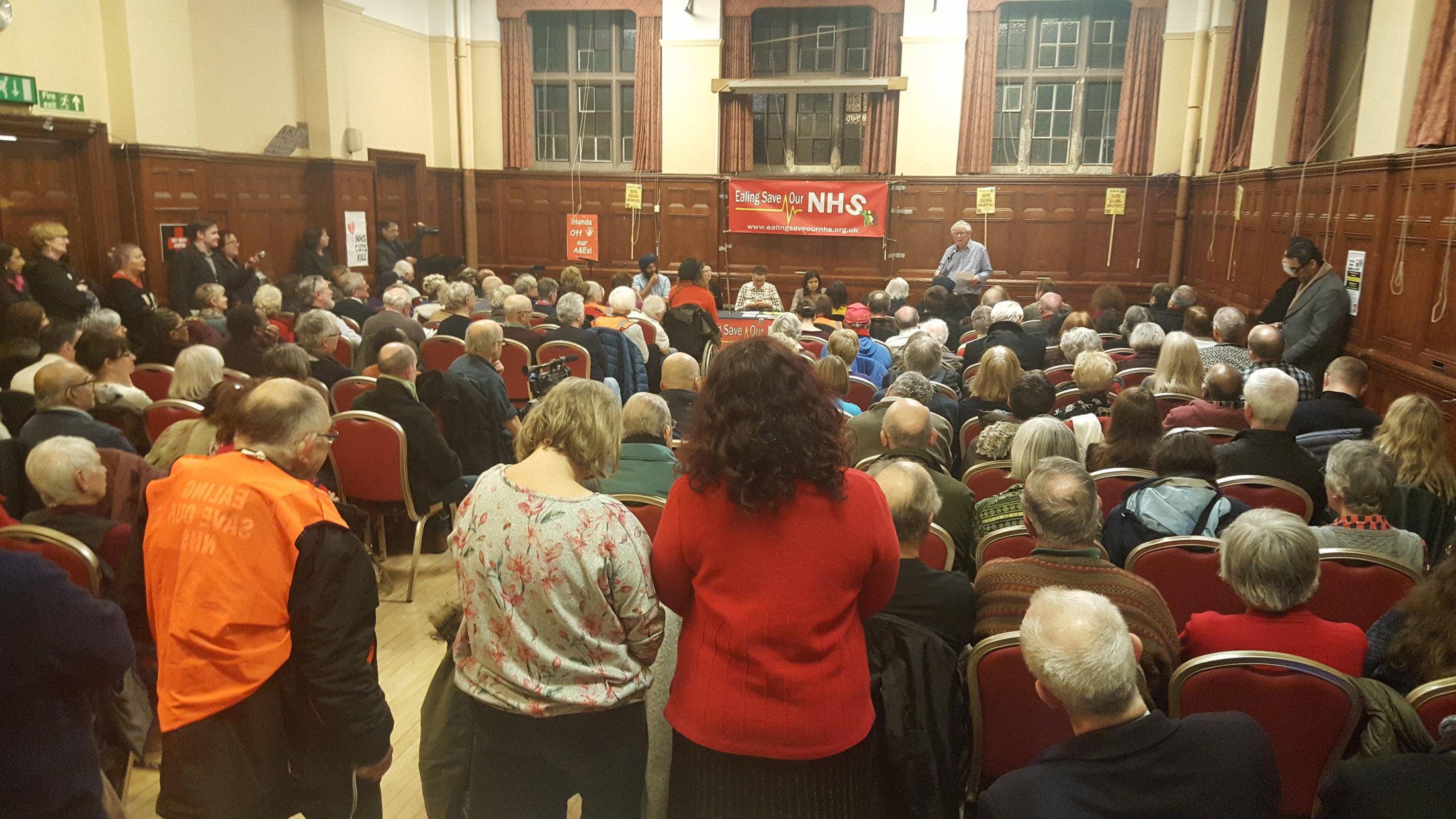 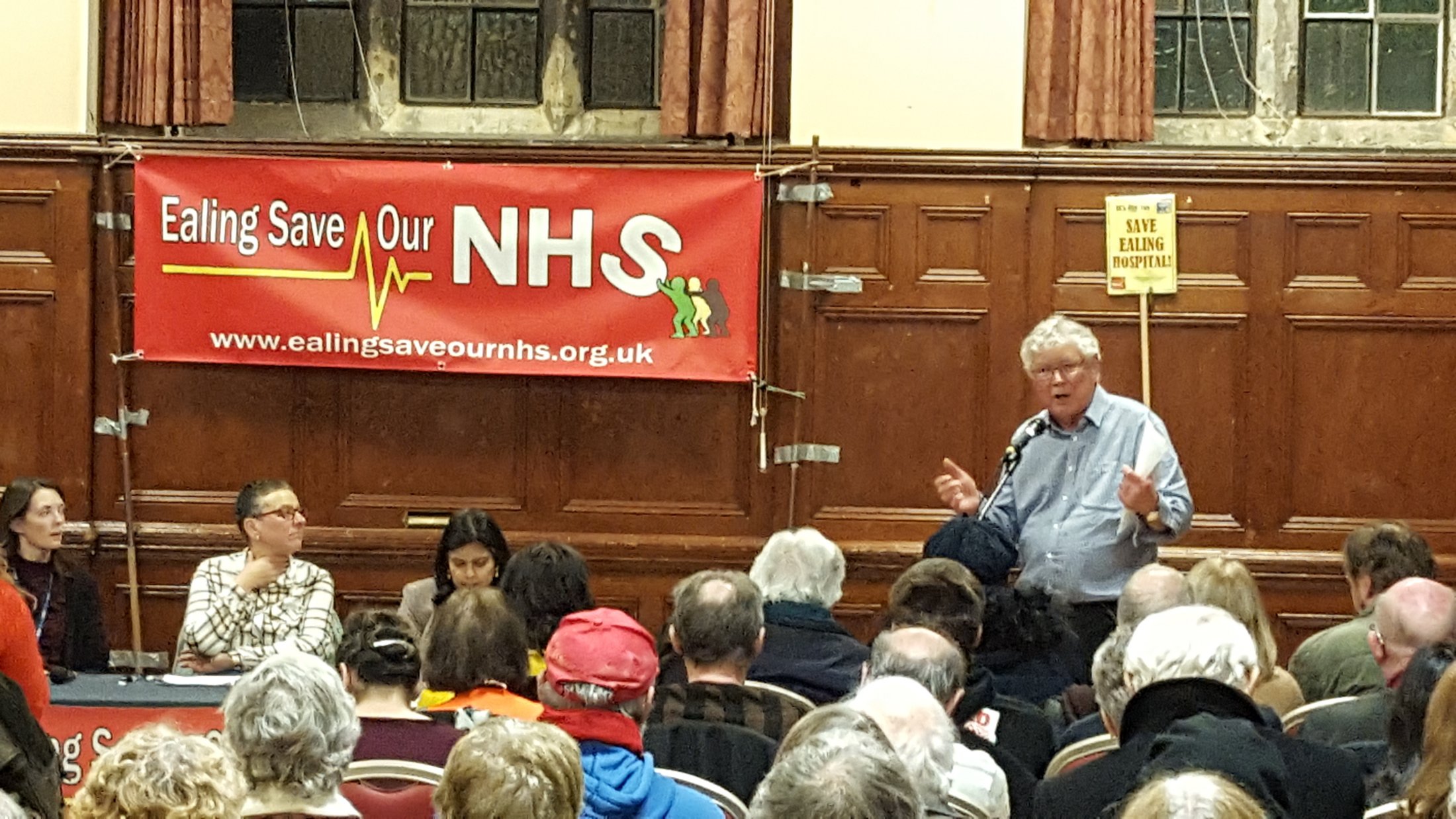 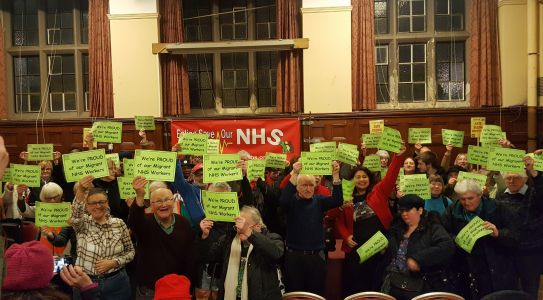 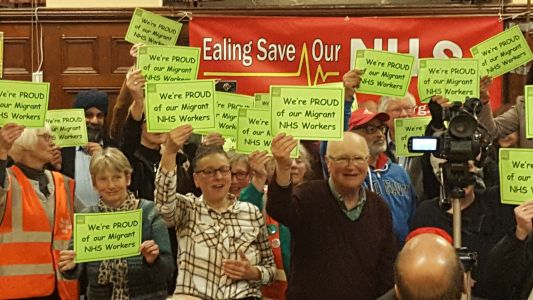 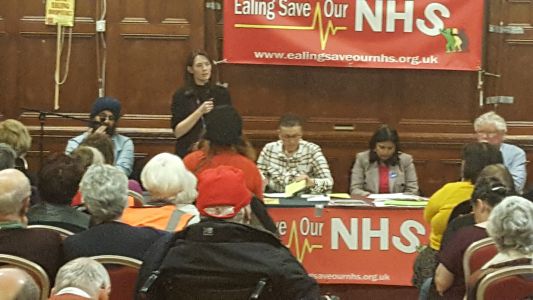 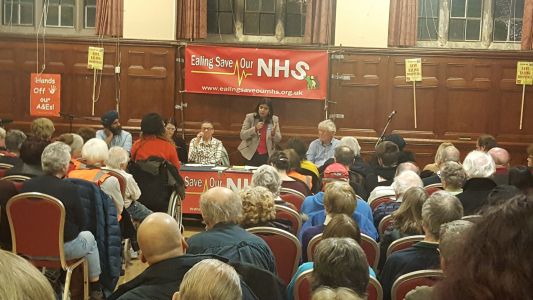 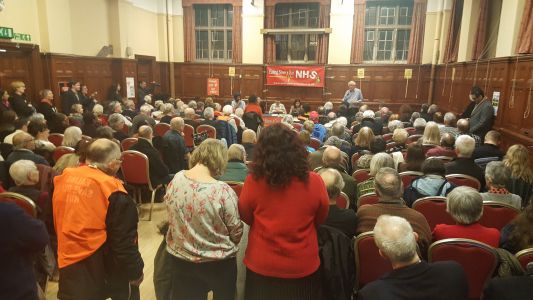 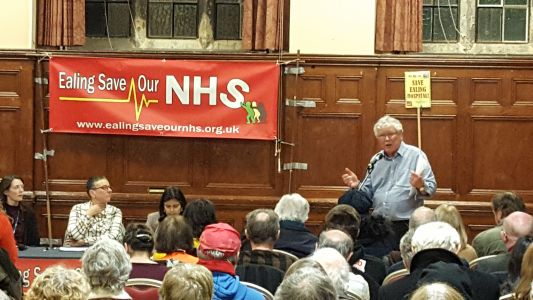