For some time the media has highlighted the crisis in our hospitals, especially in A&Es.  Ambulances that are needed elsewhere are stuck outside A&Es, sometimes for hours because there are no beds to put patients into.  In North West London we’re in one of the worst areas. Recently all local A&Es were in the bottom 12 for urgent cases, with Hillingdon Hospital the worst in England.  Obviously the closure of A&Es at Hammersmith and Central Middlesex Hospitals was the main contributing factor.  That is to say obvious except apparently to the senior health managers in charge.

Unbelievably, they are pressing ahead with plans to close Ealing A&E. It’s a familiar story, they are seriously under resourcing Ealing Hospital.  Unless this process stops, the Hospital will become unviable, at which point will close the A&E.  Without A&E backup most other services can’t function, so almost 300 beds would go too.

I’m not making this up, it’s in the “Delivery Plan” for the STP, recently uncovered by a Freedom of Information request.  The Plan includes

Ealing Hospital would end up as a collection of clinics with the Urgent Care Centre which, like many other NHS services has been tendered out and is now privately run – despite the Hospital location and use of the NHS logo. A year ago, a ‘fly on the wall’ TV documentary, exposed how badly it struggled to maintain standards.

Who Orders the Cuts and Privatisation NHS Services? 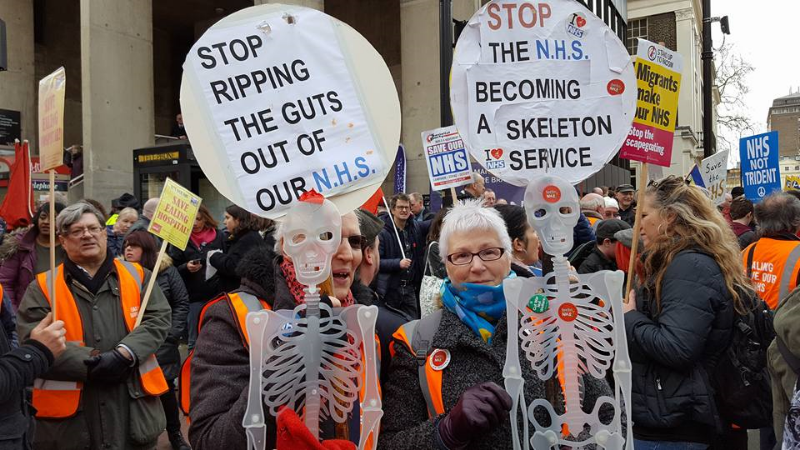 In Ealing, it’s the Clinical Commissioning Group, or CCG, who hold the purse strings.  They claim to be acting on ‘clinical’ advice, they are following instructions from the “Shaping a Healthier Future” tem, which is now morphing into the “Sustainability and Transformation Plan”.  Behind these bodies is NHS England, controlled by the Health Minister.  Their managers are appointed to follow nationally laid down directives.

The one multi-million pound growth area is the private management consultants and public relations advisors.  NHS budgets in North West London have millions to these people to organise NHS restructuring and ‘savings’.  You may have come across them as they have toured community meetings with documents and glossy leaflets explaining that health services will be much better after they implement more cuts.  According to these spin doctors, healthy living advice and community clinics will be a better replacement for expensive hospital treatment.

S.T.P.s are aimed to hugely cut health and adult social service spending.  There is no democracy or accountability, none of this has been through Parliament, local Councils have been bypassed, even though they are supposedly in charge of adult social care. England has been divided up into 44 great big areas for each of which handpicked senior managers have been appointed to draw up a plan to “meet the budget”.  Hospital Trusts, CCGs and local authorities have been told they must buy in to the process. Each of the STP areas is huge, covering several local authorities, CCGs and hospital trusts – far too big for local communities or local accountability even supposing there were any structures in place.  Staggeringly, most of them have been bullied and cajoled into signing up for the STP without even being given the full plans.

STPs are being sold as plans to integrate adult social care, health and hospitals.  But integration of services is totally undermined by the STPs having far smaller budgets.  It’s a nightmare.  Local authority budgets for social care, especially for the elderly, have been cuts so much that even the private companies now running most care homes on a shoestring are starting to go out of business.  As a result, people are stuck in hospital as there’s nowhere to go.

In our area of North West London, the STP is continuing the existing cuts programme with the Orwellian title of ‘Shaping a Healthier Future’ run by a shadowy and unaccountable organisation of the same name, based in Marylebone.  As well as the closure of A&Es at Hammersmith and Central Middlesex, award winning and much needed Ealing Maternity Ward has been shut down, followed by the Charlie Chaplin children’s ward, which means children can’t go to Ealing A&E.

The whole project has been a disaster for our community and to its credit, Ealing Council has defied Government pressure and refused to endorse the STP, along with Hammersmith and Fulham Council.  They have gone public with their defiance and even organised a public meeting to highlight the problem.

Analysis shows that cuts and closures will hit the most deprived areas in North West London.  Many people will simply be unable to access services, as highlighted in the Delivery Plan.  They will be left attempting to rely on already overstretched GPs.

Look – the Emperor has No Clothes

Locally and nationally opposition to STPs is growing. Ealing and Hammersmith have been joined by other Councils.  Retired senior health managers have gone public, saying the STPs won’t work.  Dr Tracy Batten, recently resigned as the boss of 5 West London Hospitals.  Even the British Red Cross has said that we are facing a “humanitarian disaster.”

But the health bosses are still in denial because they are hired to carry out policy and to tell their superiors that all is well.  Everyone can see the problem except for the emperor’s courtiers – paid not to see it.