Every day brings more shocking news about the NHS. Millions of people are waiting ever longer for treatment. ambulances are queuing outside overfull A&Es. But the cuts are getting worse and more savage.  All accountability is gone as the Health Secretary gives his appointed STP bosses power to over rule councils and hospital trusts.
At least we can support a massive national demonstration planned for March the 4th.  In every town and city there are campaigns springing up top defend hospitals and NHS services and the national umbrella body “Health Campaigns together” is organising a huge protest.  It’s also supported by the Peoples Assembly and Trade Unions representing healthworkers, including Unison, Unite, the Royal College of Nursing and the British Medical Association.
Ealing Save Our NHS and local residents will of be there with our banners and we have produced thousands of leaflets advertising the demonstration.  Get in touch if you want some!
Please come on this important demonstration and meet up with us. Even better, meet up outside Ealing Broadway Station at 11.00 am on Saturday March 4th.
IT’S  OUR  NHS
NATIONAL DEMONSTRATION
SATURDAY 4 MARCH
12.00pmTavistock Square London WC1
tube: Russell Square or Euston tube
March to Parliament 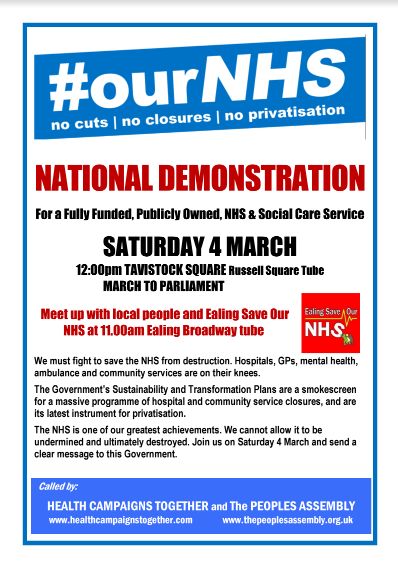 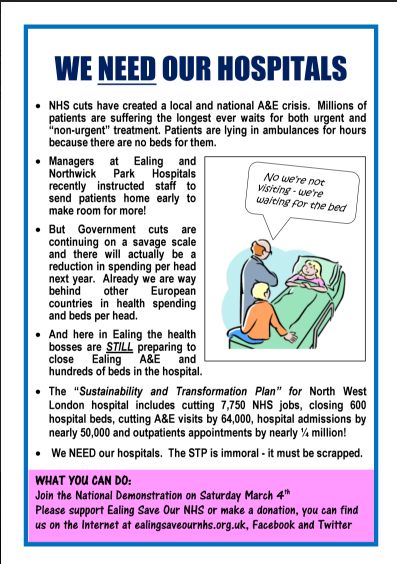