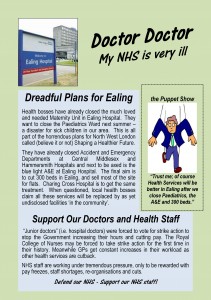 Health bosses have already closed the much loved and needed Maternity Unit in Ealing Hospital. They want to close the Paediatrics Ward next summer – a disaster for sick children in our area. This is all part of the horrendous plans for North West London called (believe it or not) Shaping a Healthier Future.

They have already closed Accident and Emergency Departments at Central Middlesex and Hammersmith Hospitals and next to be axed is the blue light A&E at Ealing Hospital. The final aim is to cut 300 beds in Ealing, and sell most of the site
for flats. Charing Cross Hospital is to get the same treatment. When questioned, local health bosses claim all these services will be replaced by as yet undisclosed facilities ‘in the community’.

Support Our Doctors and Health Staff

“Junior doctors” (i.e. hospital doctors) were forced to vote for strike action to stop the Government increasing their hours and cutting pay. The Royal College of Nurses may be forced to take strike action for the first time in their history. Meanwhile GPs get constant increases in their workload as other health services are cutback.

NHS staff are working under tremendous pressure, only to be rewarded with pay freezes, staff shortages, re-organisations and cuts.

A Winter Crisis is Coming… 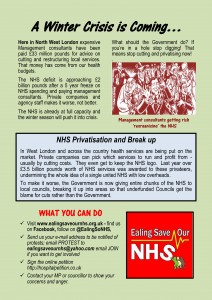 Here in North West London expensive Management consultants have been paid £33 million pounds for advice on
cutting and restructuring local services.  That money has come from our health budgets.
The NHS deficit is approaching £2 billion pounds after a 5 year freeze on NHS spending and paying management consultants. Private companies and agency staff makes it worse, not better.

The NHS is already at full capacity and  the winter season will push it into crisis.

What should the Government do? If you’re in a hole stop digging! That means stop cutting and privatising now!

NHS Privatisation and Break up

In West London and across the country health services are being put on the market. Private companies can pick which services to run and profit from – usually by cutting costs. They even get to keep the NHS logo. Last year over £3.5 billion pounds worth of NHS services was awarded to these privateers, undermining the whole idea of a single united NHS with low overheads.

To make it worse, the Government is now giving entire chunks of the NHS to local councils, breaking it up into areas so that underfunded Councils get the blame for cuts rather than the Government.